Chronic Pain after Surgery or Injury

The first publication that identified injury and surgery as major risk factors for chronic pain appeared in 1998. This paper reported that around 40% of 5130 chronic pain patients in 10 pain clinics in the United Kingdom had developed their chronic pain problem after surgery or trauma.

…the original publication also suggested trauma as another major precursor of chronic pain. This suggestion has been confirmed by subsequent studies

In principle, every chronic pain has been acute pain at some stage.

The problem is not limited to major surgery or major trauma, as even minor operations such as herniotomy can have significant consequences with regard to development of chronic pain; a recent editorial on this topic states that chronic pain is the most common and serious long-term problem after repair of an inguinal hernia.

The consequences of chronic postsurgical or post-traumatic pain are significant, not only in terms of suffering and reduced quality of life for the individual patient but also with regard to the subsequent costs to the health care and social support systems of our societies

Furthermore, persistent postsurgical pain is an area that might enable us to better understand the development of chronic pain in general, as it provides an ideal setting for the study of risk and protective factors in a very controlled environment.

While it was initially thought that persistent postsurgical pain is primarily a neuropathic pain, there is now increasing discussion that in some patients, ongoing nociception might be playing a role in this condition

Predictive factors for persistent postsurgical pain can be patient specific or surgery specific Furthermore, these factors can be subdivided into preoperative, intraoperative, and postoperative factors (Table 2). 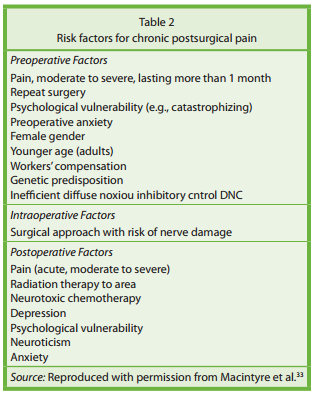 One relevant factor may be a genetic disposition to increased pain susceptibility. Over recent years, a number of single nucleotide polymorphisms (SNPs) have been identified.

Preoperative pain is consistently found to be a predictor for persistent postsurgical pain, which might reflect an independent risk factor, but could well be a manifestation of predisposing factors.

Multiple studies have consistently found a strong correlation between the severity of acute postoperative pain and the development of persistent postsurgical pain. These findings are consistent throughout the whole range of surgeries investigated.

It is important to note that the overall (median) severity of pain over the first 7 days after surgery was a better predictor than the maximum pain score, and thus the duration of severe postoperative pain may also be relevant.

…it may well be that simple provision of good analgesia in the postoperative period has a preventive effect.

When this treatment was given in the first few weeks after surgery, at any follow-up for the next 24 weeks, significantly fewer patients in the group receiving the superior analgesic regimen had moderate to severe pain on ambulation compared to patients in the control group.

…the risk needs to be considered in decisions on appropriate indications for surgery.

Relevant risk factors for the development of persistent postsurgical pain are:

There are also intraoperative risk factors, in particular traumatic surgery with an increased risk of nerve injury.

There are insufficient data to suggest ideal treatment protocols, and carefully designed preclinical and clinical research in this area is urgently needed

2 thoughts on “Chronic Pain after Surgery or Injury”