Epigenetic processes, such as histone modifications and DNA methylation, have been associated with many neural functions including synaptic plasticity, learning, and memory.

Although in its infancy, research in this area potentially unifies several pathophysiological processes underpinning abnormal pain processing and opens up a different avenue for the development of novel analgesics.

Chronic pain is a major public health problem, with epidemiological studies reporting about one fifth of the general population to be affected both in the USA and Europe.

The condition is debilitating and causes not only considerable personal suffering but also enormous socioeconomic costs, estimated to reach an annual 60 billion U.S. dollars in lost productivity. It is a figure that only stands to increase with the aging populations of the Western world

Even scientists know chronic pain is “debilitating” and causes “considerable personal suffering.”, yet the public and even many doctors believe it’s just a nuisance that can be mentally overcome.

Despite the seemingly bewildering array of nonprescription analgesics being advertised and sold in dedicated drugstore aisles, treatment of pain is still very much dominated by two classical medications: opioids and nonsteroidal anti-inflammatory drugs.

This is the truth: opioids are still one of only two types of medications found effective for pain.

Only a handful of compounds acting on novel, distinct molecular targets have emerged since the 1960s, for instance gabapentinoids, TprVI agonists, or cannabinoids (Kissin, 2010). Many of these painkillers have serious side effects, such as neurotoxicity (e.g., TrpVI agonists) and addictive properties (e.g., opioids and cannabinoids).

More importantly, many chronic conditions, such as neuropathic pain, still cannot be effectively treated in the majority of patients, at least not over sufficiently long periods of time.

This is the general problem with all these new non-opioid medications and therapies: they cannot effectively treat pain over longer time frames in the majority of patients

Meanwhile basic science has made good progress over the years, and key neurobiological mechanisms central to the generation of chronic pain have been identified.

Here we will initially outline several of these mechanisms where, as we go on to describe, there is emerging evidence for an important controlling role of epigenetic processes.

Sensitization of the pain signaling system is a key process in chronic pain states.

Such sensitization, and also tonic activation, can be induced by mediators generated and released at different levels of the neuroaxis

One important source of such mediators is peripheral tissue affected by injury or disease, since local anesthetic treatment of these tissues gives at least temporary relief to most chronic pain patients

The cellular source of these peripheral mediators is not for the most part known, but considerable preclinical and more limited clinical evidence suggests that immune cells play a pivotal role.

It always amazes me how many biological and chemical processes are affected by chronic pain, and now even the immune system.

The importance of immune cells has been tested with strategies to reduce their total number, their recruitment, or their activation, and while these techniques are probably often suboptimal, they have produced clear evidence for the role of different cell types.

Indeed, nerve injury is almost always associated with a strong immune response–a fact neglected in the literature, which tends to focus on the consequences of neuronal damage.

(B) Abnormal amplification of pain signals in DRG and spinal cord neurons: sensory neurons display hyperexcitability as a result of altered neurotrophic support and extensive changes in the expression of relevant genes, most notably ion channels and nociceptors. Second-order cells exhibit central sensitization as a result of several processes including immune and glial cell recruitment in the CNS.

(C) Peripheral inflammation and sensitization of nociceptors: tissue damage activates and recruits immune cells (e.g., mast cells, macrophages and neutrophils). These cells will release or stimulate the production of a variety of cytokines (e.g., IL-6, IL-1β, TNFα) and proinflammatory mediators (e.g., NGF and prostaglandins). This will activate or modulate the action of receptors on the sensory nerve terminals (e.g., the TrkA, cytokine, and prostaglandin receptors [EP/IP] are activated and Trp channels can be modulated). This process will result in sensitization of the nociceptive neuron.

The term epigenetics refers to processes that lead to stable and/or heritable changes in gene function without any concomitant DNA sequence changes.

This is the next layer of variation and complexity that acts upon our DNA, so decoding the genome only provides the template, while epigenetics determine which parts of it will be used.

We’re learning that DNA isn’t the only determinant of our traits, but that they are also determined by our epigenetic “switches”, which are altered by what our bodies experience. The configuration of these “switches” on our DNA can be inherited. 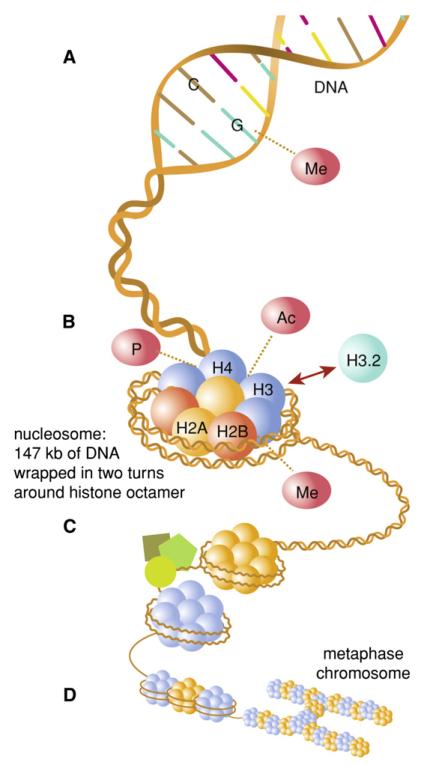 The proteins supporting these mechanisms can be broadly classified into writers, readers, and erasers (Table 1), depending on whether they

Research in this area has also started to examine certain transcription factors that impact these epigenetic writers or readers,

As explained previously, the importance of inflammatory mediators in the establishment of many pain conditions is well recognized. Equally, there is quite a thorough literature on epigenetic influences in the inflammatory process

Three epigenetic factors have so far been uncovered that can influence expression of nociceptive genes in chronic pain states.

Pharmacological interference with the process of histone acetylation can affect pain behavior, with both systemic and intrathecal administration of HDAC inhibitors having analgesic effects in models of inflammatory pain

Conversely, a pathological pain state may be able to induce changes in histone acetylation at relevant pronociceptive genes.

Finally, there is evidence for the involvement of REST in chronic neuropathy. REST is a transcription factor that recognizes a specific promoter sequence (RE-1 element) present in nearly 2,000 genes with primarily neuronal function.

REST recruits a host of chromatin modifiers, either directly or through interaction with Co-REST and Sin3 complexes, to exert repressive action on its target genes.

there is quite a substantial literature on the involvement of epigenetic processes in the regulation of memory and synaptic plasticity.

To briefly summarize some of the most salient pieces of evidence:

It is possible that similar epigenetic mechanisms are at play in chronic pain conditions, as neural plasticity is vital to the encoding of noxious stimuli in both spinal cord and brain.

Central sensitization of spinal neurons relies on molecular processes very similar to those underlying associative learning, in particular the formation of LTP.

Both forms of plasticity crucially involve

In the hippocampus, those signaling pathways have now all been shown to be epigenetically regulated, and in turn control or influence epigenetic processes

In the brain, multiple areas undergo changes in neural connectivity as a result of chronic pain, including the anterior cingulate cortex and the amygdala.

This proves that chronic pain is a neurological state, not simply a bad attitude.

Most recently, cortical epigenetic processes have been hypothesized to be modulators of chronic back pain to account for shifts in event-related EEG peaks over relevant brain regions

In summary, direct evidence that epigenetic mechanisms could be involved in the development and/or maintenance of chronic pain conditions is only just beginning to surface, and the field is in its infancy.

The first and most obvious question is whether epigenetic marks contribute to the altered transcriptional control observed in chronic pain states.

it is likely that expression changes at multiple genes will be the cause of most complex chronic pain syndromes. Hence, patterns of modifications across loci will have to be determined with genome-wide techniques

Another issue is whether epigenetic mechanisms are equally important in the different cell types involved in the nociceptive pathway.

It is well known that DNA methylation and histone modification patterns are very cell type specific, which not only has implications for scientific hypotheses, but also raises several methodological issues

In addition to basic research, there is the potential for the study of epigenetics to reveal novel drug targets for the treatment of pain.

It is already clear from only a few experiments that HDAC inhibitors might be an interesting group of drugs to explore… if given systemically, many adverse side effects, such as fatigue, nausea, and diarrhea, can occur.

The currently available data suggest that epigenetic mechanisms may be important contributors to chronic pain states.

Causal interactions may take longer to establish, but a wide variety of compounds, targeting specific epigenetic proteins, are being developed and will greatly facilitate this effort.

Such studies present an opportunity to test a new unifying hypothesis, namely, that epigenetic mechanisms regulate and coordinate the diverse transcriptional alterations that have been observed in chronic pain states.

They also have the potential to provide much needed progress in the treatment of chronic pain, opening up new avenues for drug development.

1 thought on “The Involvement of Epigenetics in Chronic Pain”