I’m posting this just because I think it’s interesting and sweet. 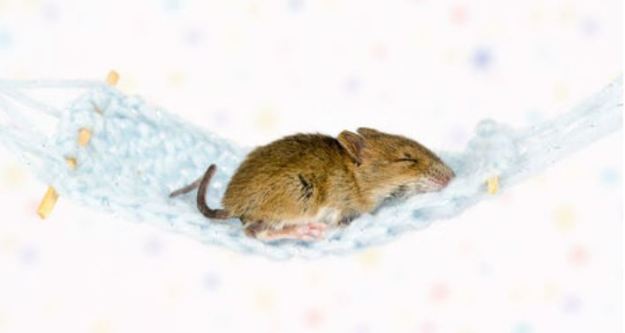 Forget the running wheel. If your pet mouse is an insomniac, what it really needs is a hammock. New research shows that mice, just like humans, fall asleep faster with a gentle sway.

Scientists have suspected that the human vestibular system—the bits of the inner ear that keep us balanced and oriented in space—are involved, but there’s been no solid proof.

So, in the new study, researchers put mouse cages on rocking platforms, monitored the animals’ brain activity, and measured how well they slept.

But their brain signals did not indicate a deeper sleep.

The mice showed other differences from people as well; the rodents like to be rocked about four times faster than we do, for example.

These differences might reflect the fact that mice carry their pups around in their mouths, which has a lulling effect, rather than rocking them in their arms like humans

The results might lead to better noninvasive treatments for sleep disorders, the researchers say.

…or bring the lives of these experimental animals to the foreground.

First, it’s a sweet story that makes me smile, and then a painful realization that these little mousies being rocked to sleep will “sacrificed” (euthanized) after the study. It’s certainly not the worst fate that could befall them:

They could be used for a pain study… and not given pain relief to see how much the pain affects their behavior. But researchers won’t need such a mouse study because there’s currently a huge experiment being done on human pain patients.

Human pain patients are being denied pain medication, but no one is observing the results: disability, depression, anxiety, suicide.